Have You Made YOUR Resolutions for 2013?
Are You Still Holding to Them

We've now rung in the new year; the sound of the bells is quickly fading into the past.  Funny how most people who resolve to do something different in the new year focus frequently on health (lose weight, hit the gym, make better life choices.)  I always notice at my company gym a spike in people the first weeks of the year; the numbers gradually fall off as if a computer-simulated validation of a Weibull survival model is being run.

Today, came across an interesting, related article from the Institutes of Medicine examining life expectancy in the US compared to benchmark countries in the OECD "high income" cohort.

The long and short of it is, compared to other wealthy nations, Americans OVER the age of 80 have very good health, if expected life years is used as a proxy measure.  Those under 70, not so much, and indeed, for Americans less than 50, life expectancy is the worst of the high income group.  The data are shown graphically below: 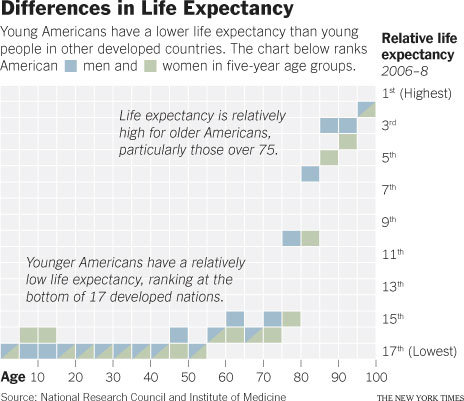 I've seen various indictments of our way of life, our health care system, and other choices, but I've never seen the data put quite this way.  The implications are striking.

Think of life expectancy.  In mathematical terms, survival is usually modelled using what are called exponential family models.  These are parametric mathematical functions most frequently involving two main parameters (usually mu - the mean describing the location and sigma - the standard deviation describing the shape), though often, the two are the same (various 'chi-square' functions, the 'poisson' distribution).  Amongst their properties, one is the so-called "memory-free" property, which is to say, the expected outcome (in the case of survival time) at time t=t1 is essentially the same as it was at time t=t0.

Put simply, if you live to be age 65, your chances of survival to 66 are more or less the likelihood that you would have survived from age  64 to age 65.  Your expectation of dying oddly does not increase in the coming year.  This goes on, irrespective of whether one is 65 or 95.

It's an oversimplification, and not quite true in the real world, but it's instructive.

So, what we see in the US is, IF we can somehow survive middle age, we rise to the top of the distribution of "health."  But before that, watch out.

How can this be?  What is it that is leading to such poor mid and early-life outcomes?  There is not an apparent skew in the data above between men and women, so oft-cited conjectures (young male violence, acting out fantasies from "Fast and the Furious: Tokyo Drift") seem suspicious.

Here are some further data from the IOM:

One thing we see is that perinatal conditions and "injuries" (both unintentional - I presume including traffic accidents and getting shot) show high odds ratios for American men and women.  Unsurprisingly, CVD pops up for both.

The bottom line is both American men and women see years of life reduced by nearly a year BEFORE AGE 50 compared to our peers in similar, wealthy nations.

In 2013, try to live a healthier life.  Keep to the gym (though, don't race there in your car and try not to drop a weight on your head).  And for heaven's sake, do NOT emulate "Jackass" or "Honey Boo Boo."