All Summer in a Day 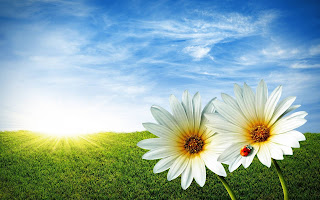 Roses occasionally suffer from black spot.
But these roses are guaranteed free from any imperfections.
It is always advisable to purchase goods with guarantees, even if they cost slightly more.

The Philip K Dick story "Super Toys Last All Summer Long," the literary basis for the film "AI" ends with a terrible disclosure that we all grasp perhaps before the final denouement. One of the penultimate passages describes the return of the father of the story, Henry Swinton, appearing at his simulated home, with simulated, perfect roses at the gates. The artificial Servingman at his side points out the reality that roses are often not perfect.

An advert came across my Twitter feed today from Saint-Jude Children's Hospital. Saint-Jude's is a charity group who raise money for paediatric cancer research and treatment, and provide free services to families of young children stricken with cancer.

In the video, a little boy, called Calvin, is shown reacting to the images his oncologist shows him of a tumour in his brain. Calvin, you see, was diagnosed at 9 with a malignancy. In the video, Calvin sees first evidence that his treatments are working to arrest the growth.


Saint-Jude's is one of a handful of charities that we donate to support; it's truly doing God's work - funding research to help families like Calvin to have hope, and providing totally free medical care for those who are struck with cancer.

There is another short story I recall from days past, this one from Ray Bradbury. It is called "All Summer in a Day," and it details a single hour for a colony of humans living on Venus. The bottom line is that, because of the peculiar rotational and weather patterns of Venus, the sky is dark and rain-filled all the time, save for one hour every seven years. Most of the children in the classroom have never seen the sun in their lives, and they eagerly await it. One little girl, Margot, has been locked in a locker as a prank. In the anticipation of the once in a near-decade event, the children forget Margot and run out to enjoy the brief dance in the sun. As the clouds reappear, one child suddenly remembers the little girl.

In reality, summer is not over in a day; but we all have a finite number of summers. For every one of us, there will at some point be no more tomorrows.

30 years ago, I had a friend named Clay Mahaffey. Clay was in my Cub Scout den. If I recall correctly, he was a good student in the way that second graders are "good" or "poor" students. I played little league with him, and recall that he was a pretty good baseball player. About as good as a 10 year old can be. He was an excellent basketball player - much better than I was. But my nearly 40 year old memory is mostly that he was a pretty nice little boy.

Clay had a younger brother named David, who was in class with my kid brother and sister. David was also a friendly little kid. But he was not much of a ball player. David also missed quite a lot of school, because David suffered from leukaemia. He would be gone from time to time for treatment. But each time, he came back, smiling.

When I saw the story of Calvin, who thanks to Saint-Jude will have a few more tomrrows - I hope a lot more, I thought of David.

We moved away from the town we were living in in the final weeks of 1980; I've never been back in all these years.

In April 1981 - almost exactly 37 years ago - David lost his battle to leukaemia. He was eight years old.

As the Servingman in "Super Toys" points out, real, living things cannot come with guarantees. Not roses. Not children. It just doesn't work that way.

I think of David Mahaffey from time to time. He would have been 45 years old this year.

If you are in position, I highly recommend giving to Saint-Jude's.