GoP Getting Stuck in "Newt"-ral

The French have an expression: plus ca change, plus c'est la meme chose. Simply put, the more things change, the more they remain the same.

At the weekend, Republican voters in South Carolina went to the polls...and voted to select Newt Gingrich as their candidate to take on President Obama in November.

Yes; Newt Gingrich.  The same guy who was forced out as Speaker of the House under a cloud of scandal and shame more than a decade ago.  The same guy who not once, but twice left a sick spouse following an extra-marital affair (and who all the while has pushed to block same-sex marriage to "protect the sanctity" of the institution.  The same guy who took $300,000 from the disgraced Freddie Mac, as he puts it, for his consulting services as a historian.  And the same guy who recently attacked Wisconsin representative Paul Ryan's budget plan as "dangerous social engineering."

Gingrich, in his attacks on Romney's career at Bain Capital, is making a more persuasive argument for the re-election of President Obama than Rahm Emanuel ever could.  If Newt himself doesn't believe in free-market capitalism, then how, exactly, is he the voice to argue against Mr Obama's "stimulus," his octopus-style state of choking regulation, and other attacks on the market?

Mr Gingrich styles himself as the antidote to the current occupant of the White House, as the true defender of "conservative" value, all the while using a more or less scorched-earth policy on his chief rival, Mitt Romney.

I'm no big supporter of Mr Romney, but what, really, is Mr Gingrich's campaign, aside from a flight of narcissistic fancy?

Setting to the side his obvious hypocrisy, the practical question arises: Are we going to do "Stonehenge" tomorrow?  No; that's not it.

Does he have a chance?

The data indicate that the only thing less believable than Gingrich's "consulting as a historian" whopper is his claim that he alone can take Obama on.

These data on the electoral fates indicate that as Gingrich rises, the Republicans sink.  Just over the weekend, his victory in South Carolina alone increased the likelihood that President Obama will gain re-election by 10% (from 51% to 56%).

Here is how, graphically, the fates of Gingrich, the GoP, and the President play out: 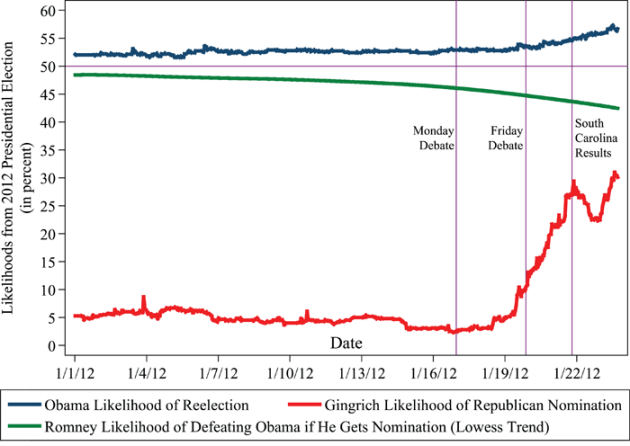 Florida is going to be a key mile-post in the slog, and as someone who thinks that President Obama really needs to be shown the door for a remarkably inapt performance, I would suggest that the voters in the Sunshine State consider seriously whether they want to follow the Republican Pied Piper over the cliff.