The NBA in Black and White (and Now, Gold, Apparently)

I don't follow the NBA at all, really, and don't much care about the games, let alone the implicit politics of the league.  When the over-paid adolescents who play the game went on strike against the overly-wealthy adolescents who own the teams, I didn't miss the NBA, even a little bit.

Recently, though, living in the greater New York metro area, it's tough not to be aware about the somewhat odd sensation of the Knicks ' Jeremy Lin, who joined the team after having been waived by the Golden State Warriors in December, and failing a try-out with Houston, had more DNP (did not play) games for most of the truncated season than games he had appeared in.

Then, among other things, Baron Davis, the team's starting Point Guard, was hurt, and Lin went from the end of the bench to something of a sensation, scoring 25, 28, 23, 38 (against the Lakers and Kobe Bryant), and 20 (the final two on free throws to win the game) points.

The performance, according to some sources, is the most points a player has had in his first five starts since the NBA-ABA merger.   Lin has become something of a sensation since, rocketing to the top of various internet blogs and "Twitter."

Not bad for a guy who received exactly zero college scholarship offers, who played his NCAA games at Harvard (yes - that's not a typo), a school that has not even been in the NCAA tournament in more than half a century, was undrafted, and cut twice in the space of a month.

It's a terrific human-interest story, but now, has drawn a sour comment from a Daily Beast blogger called Buzz Bissinger.  Mr Bissinger, as certain folks are wont to see, has distilled the whole phenomenon down to white racism.

No joke.  Jeremy Lin, a Chinese-American, represents a totem of white bigotry against black basketball players.

Mr Bissinger, quick to dismiss Lin's performance, points out that five games do not make Jeremy Lin the next Michael Jordan.  He points out that Lin is hardly the first guy to go undrafted and make waves, listing among others, John Starks and Ben Wallace.  Furthermore, he offers the cheap shot that Lin "has no outside shot," dismissing his pair of tres against Kobe with a glib "I know he made two three-pointers Friday against the Lakers, but so can some schlump picked out of the crowd at halftime to win a restaurant coupon to Applebees."

What a brilliant observation from an allegedly professional writer.

Well, no one I've seen has said that Lin is the next anything.  No one is suggesting he is headed for the NBA Hall of Fame, or indeed will not go straight back to the bench once Davis and Carmelo Anthony return.  I would bet that Jeremy Lin, if asked, would in fact be damned happy to be the next John Starks, who had a 13 year NBA career.

So what motivates Buzz Bissinger's animus towards Jeremey Lin?

And sorry, because people hate to hear the cold truth, but there is a factor of race: if he were African-American, would there be the same type of hysteria—oops, I’m sorry—Linsteria? Nope. He would be perceived as a potentially very promising black player, but because of the eternal and wrongheaded assumption that all professional black athletes are naturally gifted, there would be none of the linsteria.

For the past 20 years, the NBA brass and fans have been craving a Great Hope, and Lin has become the latest candidate. Yes, he is Asian-American and his ethnicity should not be mitigated. From what he said in an interview withTime, he took his share of shocking racial abuse when he played opposing Ivy League teams.

But I don’t think fans are going wild over him now because of his breaking the Asian-American pro-basketball barrier. They like him because he is talented and exciting, at least so far. They also like him because he is light-complected and, in his Christian beliefs and prayer penchant, echoes much of white America.

There you have it.  He is being embraced because, well, he's basically white.

I recall Rush Limbaugh being essentially run out of town on a rail making the same sort of comments about a quarterback of somewhat marginal ability being hyped because he was black.

Some speculate that Lin wasn’t drafted because he is Asian-American, but that’s ridiculous: pro franchises would draft a kangaroo if he could hold on to a rebound and not put it in his pouch and get whistled for traveling. Lin tried out for eight different teams after his senior season in 2010.

Really?  So the fact that Lin, who was the MVP of the Palo Alto High School basketball team that won the California Central Coast championship in 2005 (In California, there are not "state" championships - in a state of 30 million people, that becomes somewhat of a logistical challenge), ended up at Harvard because Berkeley, UCLA and USC and other more traditional basketball powers would not even give him a place on the bench had nothing to do with his ethnicity?  At the time, we were living in Los Altos, California (the next town down the 101 from Paly), and there was, to put it mildly, surprise that no local schools wanted him.  One of the best players in the entire Bay Area, and no one wanted him.

There was a famous story where Lin went to an AAU workout, and the coach looked at him and said "Volleyball practice is tomorrow."

Incredibly, Bissinger winds up his misguided diatribe complaining that the adulation for Lin is misplaced, and that offers as evidence that LeBron James and Kobe Bryant are simultaneously among the best and most reviled players in the league.  His argument is that neither has been "charged with a crime."

I know that a lack of a criminal record is not high on my list of criteria when evaluating my choice of role models.  It would seem to my that once upon a time, it was a minimal, but necessary, criterion.

I don't know how good Lin really is, or how long his fame will last.  But I find it ridiculous that buffoons like Buzz Bissinger need to apply their own idiotic racial prisms of black and white to *every* issue, no matter how misguided or inappropriate.  I hope Jeremy Lin, Harvard graduate, quiet Christian, and quintessential underdog goes on to a good if not great career.

Is It Safe to Come Out Again?

The Super Bowl was last night - won of course by the New York Giants, 21-17 over the New England Patriots.  Not to rub salt in it, but it seems that one Boston team is taking cues from another in how to lose, painfully, and in the final minutes, to a rival from New York.

Didn't watch much of the game.  I don't much care for football, and never have.  Never been to an actual professional game, and I think have seen exactly one of the Super Bowls since the Chicago Bears' embarrassing "Super Bowl Shuffle" song and music video made a sort of star from an enormously fat man who shares a name with a large, kitchen appliance.

A couple of thoughts on the "action" last night, such as it was.

First They Came for My Sugar Crisp...

Tip of the hat to Reason magazine, who alerted me to the latest bit of creeping soft socialism masquerading as medical science.  It seems that a researcher at the University of California-San Francisco (UCSF) has completed a "study," and published it in the respected journal Nature, in which she has identified sugar as a toxic additive that must be closely controlled through government action. 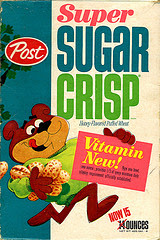 
In her report titled "The Toxic Truth About Sugar" (I'm not making that up), Laura Schmidt, in collaboration with UCSF endocrinologist Robert Lustig, argue that as a society, we need protection from "the health harms of sugar," much in the same we we are 'protected' from similar threats represented by booze.


Professor Schmidt describes herself as a "Medical Sociologist," which is in and of itself a bit odd.  But in reading her arguments to CNN, she makes the following claim as one of the central pillars of her point:


More people on the planet Earth are dying from chronic diseases such as heart disease, stroke, cancer and diabetes than anything else. This is even true for developing countries that have turned a critical page on health: People in those countries are now more likely to die from the "diseases of affluence" than from the "diseases of poverty" like malaria and cholera. Major risk factors in chronic disease, of course, are alcohol, tobacco and junk food consumption.


Now, I know the epidemiological data around obesity, particularly in the U.S., and do not deny that too many Americans - and an alarming number of children - are fat.  Type 2 diabetes is a large and growing threat.


But one logical conclusion of the highlighted text above implies is that as fewer people in poor countries die of illness based in poverty, they ought to live forever.  It's a denial of the reality that we are all going to die at some point of something.  Even busybody researchers at UCSF.


The "solutions" that Dr Schmidt advocates are not at all surprising to me, having lived most of my adult life in the San Francisco Bay Area, the world's epicentre of aggressive, nanny state junk science.  Sugar must be taxed and regulated, in her own words, "taxing products, setting age limits and promoting healthier versions of the product."  Mixed in is the all-too-familiar "corporations are the root of all evil" meme, blaming corporate marketing for limiting our ability to make "good choices" about food.


Not once is it mentioned that what's in a lot of these products is not, in fact, traditional "sugar," but rather, high fructose corn syrup, something that is a DIRECT consequence of government meddling.  The annual "Farm Bill," and USDA budgets (talk about the morbidly obese) provide generous, market-distorting subsidy for corn production.


Perhaps a start would be to STOP using tax-payer funds to alter basic free market dynamics?


I'm old enough to remember not only Sugar Crisp cereal (when "sugar" was not a dirty word), but Sugar Smacks as well. 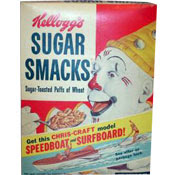 Also on The Hit List?
I'm also old enough to remember a time when parents actually lived up to their obligations of controlling what came into their homes, and how much of it their kids could eat.

A time when my parents - and not an increasingly intrusive government - said "No."

Does it Come with a "Bail Out" Warranty?

Today, I discovered an an odd item for sale on eBay.  A seller in Chicago has put on the block a 2005 Chrysler 300C driven by President Obama during his time as an Illinois state senator.  There is even a title to demonstrate the authenticity. 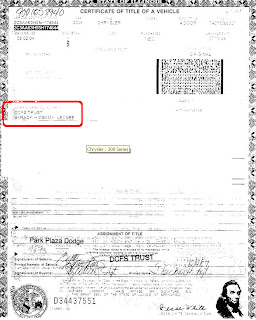 The auctioneer has set an opening  bid of $1,000,000.
Aside from the fact that the alignment likely pulls hard left, the car has obvious value.
If you can't pay the reserve, you reckon that the feds will bail you out?  Are you "too big to fail?"
Posted by DWBudd at 22:27 No comments: