The Land of Chocolate (and High Taxes)


The election is now just over a week away, and still not quite sure what the 6th of November will hold.  I suspect that President Obama will win, though given how poorly he has performed recently - and just how how shrill and desperate his supporters have become - I am less confident of that than I was a month ago.

But as the French say, plus ca change, plus c'est la meme chose.  Put simply, some things apparently never change.

In my old home state of California, awash in a sea of red ink of volume only slightly less than the San Francisco Bay, apparently, Governor Jerry Brown has put on the ballot Proposition 30, which would place sur-taxes on "very high" incomes to help to balance the state's shaky books.

(As an aside, all the sturm und drang about Mitt Romney's infelicitous "binders full of women" remark I suspect should be placed against the Democrats' ledgers full of nothing.)

Governor Brown's proposal would, for example, raise taxes on people earning 500,000 per year from 9.3 to  12.3 per cent.  The Proposition is leading in the polls, and likely will pass, though support is sliding.

Mr Brown today offered in an interview that the rich have a moral obligation to pay more, citing Biblical scripture.  Setting aside Governor Brown's very shaky math - he defended the tax raise pointing out that a 3 per cent rise in tax is modest; in fact, a rise from 9.3 to 12.3 per cent is more than a 30 per cent increase - but what's a little fun with numbers among friends.

The larger issue is do the rich have a moral obligation to pay more in taxes?  And, more to the point, how much more?  We've all seen the data, and heard the notorious comments by Governor Romney about the 47%.  The richest 1 per cent pays about half of all income taxes.  I suspect that, in California, home to among the most progressive income tax regimes in the country, that figure is probably not far off.

I am not a fan of the flat tax for various reasons, and I generally accept the socialist argument that those with more should pay somewhat more.  But when do we ask the question, does the government have a moral obligation to spend its revenues wisely?  To be a better steward of its resources than it is?

Senator Tom Coburn (R-OK) recently released his book on government waste, and suffice it to say, I wonder how ethical it is for the government to take in tax money and spend it on sports arenas or the PGA Hall of Fame.  And do we really need to be promote watermelon consumption or to create robotic squirrels?  I've seen all of the "Terminator" movies, and am suspicious that that last effort is going to end well.

But good Old Governor Moonbeam - who once aspired to the priesthood - adheres to at least a segment of the faith.  Right to the bitter end, apparently.

Tune in Tomorrow, When We're Gonna Do *FRACTIONS*


Came across an interesting article yesterday in The Economist.  The authors were commenting on a recent study by economists at the University of Miami that discovered another reason why mathematics are important.

It turns out, the 'average' American's inability to grasp concepts around fractions and proportions, added to the lure of "more," yields poor choices, at least when it comes to the allocation of economic resources (i.e., our money).

The study of 600 shoppers asked for opinions on the best "bargain" when confronted with various options.

Overwhelmingly, when given the choice of the same amount of product for less vs. more product for the same price, the shoppers opted for more, even when the better bargain was the latter.

As an example, shoppers were given the choice of product A, either at a 33% discount, or 33% additional product at no additional cost.  The choice overwhelmingly was for "more stuff for free," with shoppers indicating that the two 'bargains' offer the same value.

Well, a quick look at the maths makes it clear that the better choice - economically speaking at least - is to opt for the discount.  Quickly think of a 10 ounce bottle of shampoo, for $1.  If you get the same shampoo at a 33% reduction, you will pay 67 cents for 10 ounces.  That's 6.7 cents per ounce.

On the other hand, if you opt for "more stuff," you get 13.3 ounces for one dollar, or 7.5 cents per ounce.  As an aside, for the two to be equivalent, the additional "free" product would have to be 50% more.

Again, overwhelmingly, the shoppers thought that option B was superior.  The classic, grade eight algebra fallacy that 25% plus 20% must be 45%.

In this case, the two scenarios are equal.

We tend to 'fall' for spurious "buy one, get one free," or "additional discount taken at register" offers, and ignore what our high school maths teachers taught us about fractions and how to multiply and add them.

When in doubt, one can of course ignore the math test, and instead just rely on reading - at grocery stores, virtually all products listed will print the unit price on a small tag on the shelf.  When in doubt, just read. 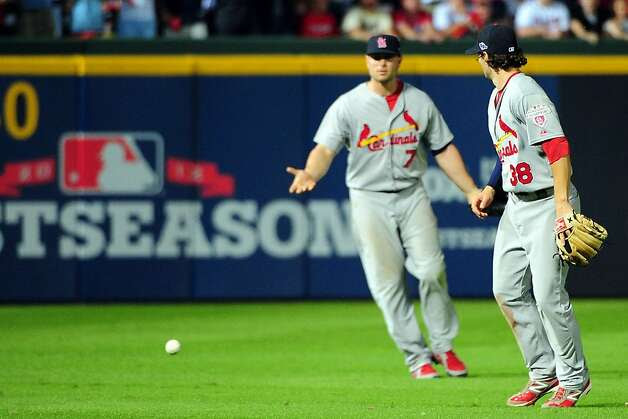 The controversy and debate continue to rage.  A crucial moment and one of the contestants just stands there and lets the ball fall in.  And one side of the argument screams that those chosen to moderate the contest made the wrong call. Passions are inflamed.  The argument goes on and on about just what the proper role for judgment by the referees of the contest ought to be - when should they let the two sides just go, and when should they intervene?

Of course, I'm talking about the Friday National League "wild card" playoff game between Atlanta and St. Louis, a topic that is far more interesting than just how 'wrong' Clint Eastwood's now almost prescient observation about empty chairs was...

The situation for those not following professional baseball, is as follows.

The Atlanta Braves and St. Louis Cardinals faced off Friday evening in a winner-take-all contest in Atlanta.  The Braves, over the first handful of innings had kicked and thrown the ball around to the point that they trailed the Cardinals 6-3 late in the game.

Entering the bottom of the eighth inning, a little life.  A walk.  A fielder's choice, and a single placed runners at first and second with only one out.  The Braves had been pretty ineffective until then with runners on the bases, and that futility appeared to continue when shortstop Andrelton Simmons popped a lazy fly ball into shallow left field, perhaps 75 feet over the head of St. Louis SS Pete Kozma, but in front of left fielder Matt Holliday.

It's that one of 100 - where, because of poor communication, or the noise of the stadium, where one or both of the players will simply stop, and the ball will fall, unmolested, to the turf for a gift single.  Which of course is exactly what happened, as Kozma, who at first signalled for the catch and then at the last second, peeled off.  Holliday had stopped running in, and the ball landed to the joy of the Atlanta fans.

The celebration was short-lived, as left field umpire Sam Holbrook called Simmons 'out,' despite the non-catch.

The reason for the call: Holbrook invoked the rule that is the subject of discussion in the first days of every little league practice in the US, and I suspect, many other countries: The Infield Fly Rule.

Without getting into too many details, the rule basically was put into place decades ago to prevent the defenders intentionally allowing an easy pop-up on the infield to fall, then quickly picking the ball up for an easy double play.  The situation requires:

There are other details, of course, but the point is, a fielder cannot gain advantage by intentionally not making a play through chicanery.

What is in dispute in all of the above is item three - just how "routine" the ball was (and it was, to be fair, an easy catch), and did the umpire make the right judgment call?

Much of the debate I've heard has focused on things such as the nullity of the call because a base umpire did not make it (irrelevant - there is nothing in the rules stipulating which umpire must make the call - and there are only outfield umpires in the playoffs and All-Star Game), to the fact that the left fielder called for the ball (which is a false argument, because the rule specifically says that an infielder need not make the call, and does, in fact, state that the rule is in effect even if an outfielder ultimately makes the catch), to the fact that Holbrook waited until the point that the ball was past its apogee and was near the ground (which strikes me as a reasonable point).

As I see it, the call is plainly the wrong one because of three factors.

First, looking at the intent of the rule - does anyone believe that Holliday and Kozma meant to let the ball fall?  Was there an attempt to gain a dubious advantage by allowing it to land without being caught?  I don't think so.

Second, was there a real expectation, or even a chance, that in not catching the ball, a double play was possible?  Not a chance.  At best, after the ball landed, the Cardinals might have been able to force Dan Uggla out at third.  In fact, they did not even succeed at that.

Third, and most important - as I see it, the empirical measure of whether a call is right or wrong is this: Suppose the call had gone the other way.  That the infield fly rule were not invoked.  Would the other team have argued the call so angrily?  Would they have argued it at all?

I suggest that, had the infield fly rule not been called, the St. Louis Cardinals would not even have complained about it, and indeed, their players and fans would have focused their anger on why two professional players failed to catch a routine popout in shallow left field.

All the other comments I'm hearing are just noise.  The infield fly rule is not complicated.  It's not difficult to understand.  One need not be a former major leaguer to grasp it.  It's a simple rule, and the problem here is entirely about whether a human being used the right situational judgment around whether to invoke it or not.

The bottom line is this: Pete Kozma should have just caught the ball.

And the Atlanta Braves should not have made three errors.