With Your Fist Holding Tight, to the Strings of Your Kite

This morning, my news feed brought this opinion piece from the Guardian newspaper in London. The author in it had commented wistfully about what she calls a "full empty nest syndrome," which is to say that her family has reached a sort of quasi-limbo stage - known in many parts as "adolescence" - in which her children are physically present in the home, but emotionally absent.

Our son is ten years old, so adolescence is juuust over the hill over there (squint and point to an imagined horizon in the distance).  He's still very much present in our home and in our lives.

It's an odd read, and certainly, I am awaiting his encroaching teen years with ambivalence.  But what struck me and stuck with me in the hundreds of words was this passage:

When our children are very young we think we are living in hell.

We think that nothing could ever be as bad as this living hell, except possibly if our father-in-law came round for tea as well and pointed out how we should just relaaaax more.

When we’re deep in the exhausting Hell of the Early Years, the temptation to abandon the children in a petrol station forecourt with a packet of Skips to keep them going and a note saying Out of Order taped to its dummy, can be overwhelming.

This Living Hell scenario of the Early Years, suffocating us slowly from all sides like a gigantic, infected pustule of exhaustion, tantrums, resentment, laundry and human excrement, has the unfortunate side-effect of somewhat overshadowing the beauty and wonder and loveliness of life with young children.

So many times I wished those years were over. Over and over. And over again.

I confess, though it's true that the first few months (in our case, six) of life can be exhausting, that the series of days where you simply do not string together more than three hours of sleep consecutively are impossible to truly prepare for, I never thought of the early days of our little boy's life as a living hell.

I surely did not wish them to be "over."  Once or over and over again.


I don't pretend to be some sort of Oracle of parenthood, but when our son was tiny, people advised us that the days were magical, and to be treasured.

I am almost 50 years old, and thus, I know magic is not real, and in any case, its illusion does not last long.  We clung to the moments for as long as we could - knowing that night follows day as surely as day follows morning.  The sun is up, it shines, and it warms.  But we know it will set.

No amount of holding a little one's hand tightly can stop it.

The author complains about having to read the same children's stories, doing the same voices for the thousandth time.

Our son had an illustrated book of Mother Goose rhymes, and we 'read' it together so many times that the pages have long fallen out, the spine is broken, and the cover is, well, it's seen better days.  We kept that book, and every now and then, we pull it out and for just a moment, he's two and wide-eyed and 'reading' along with "I Saw a Ship a Sailing." 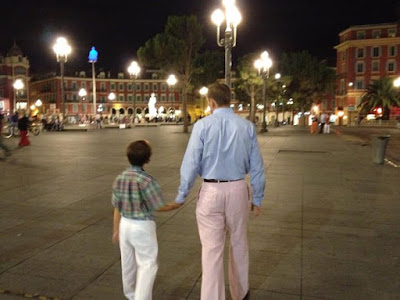 A little while back, we were sitting and looking at some old photos; my little boy (not so little now, of course) saw one of me tossing him into the air and it struck him that I no longer pick him up and play with him like that any more.

"Daddy, why did you stop throwing me in the air?" he asked.

"Well, for one, mommy was never too keen on it," I answered (truthfully).  "But there is a couple of trends, each going in the opposite direction going on.  First, you are getting bigger.  Second, I am getting older. Either of those alone eventually is enough, eventually, to keep you grounded.  Together..."

Everything lasts until it doesn't. A friend once me told me to pay attention to moments as your child grows up.  Picking him up.  Brushing his teeth.  Sorting his clothes for the day.

Holding his hand across the street.

For all of these small moments - every one of them - there will be a last time it will happen.  You won't recognise it when it occurs, but it surely will.

My little boy still holds my hand when we cross a busy street, but I know one day, he won't.

One day will be the last time your child will hold your hand to cross the street. You will not know when it comes, so hold on tight every time you do.